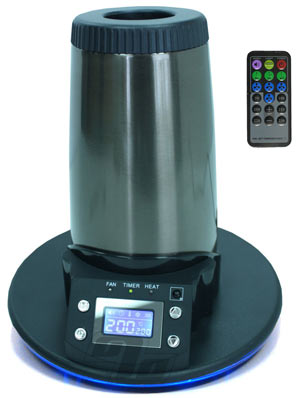 So I have had the Extreme Q vaporiser at least a week  now and I am just about used to it. It has been a journey, as a relatively heavy weed smoker to make the transition from the pipe and spliff. I find the high from vapour slightly different (cleaner, perhaps gentler) but perfectly acceptable.

There’s a few ways to use this machine, you can fill the bag, or you can just toke on the whip, which is the word for a pipe you attach to the vaporiser to inhale the vapour.

After extensive research I have found the whip suits me. Bags are ok but a bit of a pain in the arse frankly, and they also don’t have the power that the fan powered whip can deliver, which I need, it seems.

I’ve established that 225 degrees celsius is my preferred temperature. And that it’s a good idea to have a lot of weed ground up ready for use at the start of the session.

I switch the extreme on when I get up, and it stays on all day.

Normally I fill the bowl up with weed, stick it on to heat and then walk away for a few minutes, go and do something else. This seems to make a difference as to the thickness of vapour.

I find when I do this I initially I get a few very strong blasts from the bowl using the handy remote to set the fan to speed one, which I’ll then come back to again another few minutes later, finish it off, then most likely pack another bowl ready and swap it with the now vaped bowl.

And repeat. This is what works for me.

Also the flavour of weed taken this way is much more full bodied than when it is smoked. You really taste all the flavours. Yum yum.

After over 2 weeks using the Extreme, I had to go to a social event, so couldn’t really take the vape. Instead, I took the pipe I had been using which I even cleaned quickly.

It was one of the most disgusting things I have ever tasted.

Like barbecued camel shit, or the shit of one thousand sick arses. It was amazingly bad. I shall not go there again.

I have also found the best way to vape hash. You make a sandwich basically. A good layer of weed above and below the hash seems to work well.