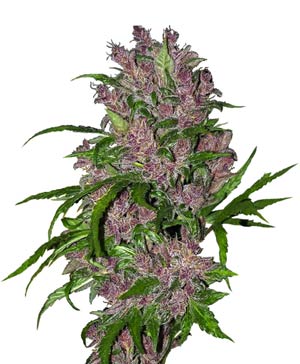 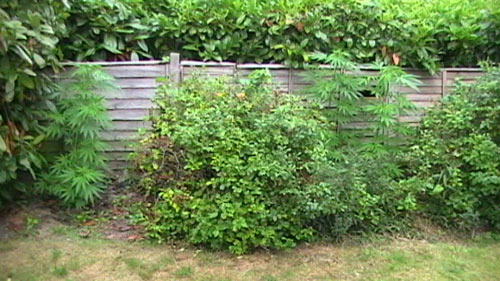 An amazing amount of cannabis does grow without problem outside in the UK! And as we know weed that has been grown in the sun is always going to be better than weed grown using artificial lighting.

Guerilla growing (growing weed in the ‘wild’) is quite popular – costs are low and it can be done almost anywhere. The south of England is better, but plenty of fine weed has been grown outside in the north of England, Scotland and even Wales.   Recent improvements in autoflowering strains mean you can grow cannabis plants in just 9 or 10 weeks and without too much bother.

If you have a nice private back garden, all the better. If not, you can always consider guerilla growing.

Sensi Seeds Purple Bud Automatic is popular outdoors in  the UK. Check it out here

Other strains proven to grow well in cold climates like the UK are:

Passion Number One from Dutch Passion –  a simple to grow indica that thrives outside in the UK. The dutch have been apparently growing this outdoors since the 1980’s – in their cold climate.

Frisian Dew also from Dutch Passion – This strain is half indica half sativa and again will thrive outside in the UK.

Purple Maroc from Female Seeds –  A sativa that produces lots of resin and finishes very early, does well in the UK.

Plants are normally started outside in in April – although recent arctic conditions would suggest this isn’t sensible. May perhaps! You could also start plants inside, as they don’t need big lights to start with – a simple florescent light can be used to start them.

Flowering generally begins in August or September, depending on the strain and can take several weeks at the least. Some plants will not finish until October – some strains such as Purple Maroc or autoflowering strains will finish much earlier, lessening the chances of mold affecting the buds, or hitting a frost. You also get your bud earlier!

Take a look at all of Sensi Seed’s autoflowers here.

The Sensi Skunk Auto is getting rave reviews from outdoor growers.

Never plant seeds directly into the soil. It’s much better to grow the plant in a controlled environment for 4-8 weeks before slowly introducing them to an outdoor space by increasing their exposure by a few hours each day before replanting or leaving them outside permanently.

Consider also that plants grown in pots will generally not grow as big as ones grown in the ground, so if you have to use pots consider using Smart Pots or similar. I have just tested these and found them to be amazing, indoors and outdoors.  They are what’s used in many big US grows though you’ll find them cheaper than on amazon.

They allow for air pruning of the roots. I will never use a normal pot again after personally seeing the results of plants grown in these pots. They are known as aeration containers and the bigger the better.  If you want to grow a kilo outdoors, this is definitely one way to go.

Plant Magic Plus is also getting good reports.

You may also want to investigate using molasses – specifically black strap molasses.  Some people only use molasses. You just put half a tablespoon into a small pot, add boiling water, let it dissolve a bit, stir in then add to your watering can or whatever. Added just before flowering begins this definitely ads to the weight of the buds.

Another option is to soak a tablespoon of bat guano in 5 litres of hot (not boiling) water over night, mixing well, and using the next day. Feeding every couple of weeks is normally sufficient.

I saved a copy here of the super soil recipe from legendary outdoor grower Tom Hill if you want to really go for it.

Getting hold of the ingredients for ‘Super Soil’ can be difficult, however, I recently discovered a company that supplies everything you need to make the best ever soil for cannabis plants.

In the UK there is a company called ‘Living Soil’ who make amazing dry soil amendments.

They even have specific amendments for autoflowering plants. If you are in the US or Canada there is an alternative called Gaia Green.

If you are serious about growing organic cannabis I cannot recommend enough using Living Soil amendments along with any sort of ‘light mix’ soil. They work best when left to ‘cook’ for a couple of weeks.

When using bottled fertilisers always use much smaller measures than suggested by the fertiliser manufacturer. Often following manufacturers instructions leads to over feeding and burning.

Do be very careful it’s an easy mistake to make. It may be better at first not to use any fertilisers as it’s so easy to cock it up – especially if you are using a soil with food already in it. Fish Mix is another great all round fertiliser that feeds the plant and is difficult to over use.

You can start plants indoors under a fluorescent lamp (like a kitchen tube) for 24 hours a day without a problem. You’ll have to put them up close (like an inch or so) for that type of light to work ok. They are cool so don’t burn the plants.  These types of light are fine for the early stages of growth.

You can still start plants outdoors when it is not April. You could plant something in say August  and all that would happen is that it would go straight into flower if there is enough darkness. In effect seeds planted when we have long nights (12 hours dark or more) will ‘autoflower’ and should be fine as long as they don’t get too cold. Less than 15 degrees seems to be when they will start to become unhappy. You can protect plants from the cold with cloches, cold frames, a greenhouse or by bringing them inside for cold nights.

Growing out of season yields are obviously not as big as normal, but certainly can be larger than some autoflowering plants. For many people the smaller size of plants grown like this can also be an advantage. Remember you can also ‘tie down’ plants that are getting too big, or ‘top’ them to keep them under a certain height. This normally leads to higher yields.

Autoflowering plants are becoming popular in the UK, with the possibility of two grow seasons in one summer – I would start planting these in May, June and July.

There is a new class of Autos known as ‘Super Autos’. ‘Chaze‘ is particularly good as an outdoor plant in the UK that yields significantly more than your normal  auto though takes a bit longer then 70 days.  Magnums are also amazing for yield and high.  Autoflowering plants can also be topped but some handle it better than others.  You can keep an autoflower successfully under 24 hour light – many people have – so if the weather is crap you could bring an auto inside at night for more light if you have a decent light.

The water that you use to water your plants is hugely important, particularly if you are growing in pots. In the earth this tends to be less of an issue. Some people PH their water, some don’t. I did for a while and then noticed the plants seemed to love the rainwater which was around 8 as well – the same as tap.

Tap water in the UK contains calcium and other elements that can be good for weed. Outdoors you should be OK without messing around with this too much but if you notice discolouration on your plants it may be worth checking the ph of your water – Around 6 is good.

Since I first wrote this article, more autoflowering strains have come out, and I have discovered others which I must include:

Maxi Haze – These plants are very high yielding outdoors, up to 200g per plant. From Grassomatic, an expert Spanish company. Well worth a look.

Frisian Dew Auto – This is Dutch Passion’s autoflowering version of their very best outdoor plant. Ideal for the UK climate.

Super Skunk Automatic – The classic from Sensi in autoflowering format.

Magnum Autoflowering is a kick arse autoflowering variety. The highest yielding auto I have personally grown. Given plenty of room this plant really delivers. Reports of 250g+ if grown in the ground. The smoke is really nice – an upbeat, euphoric high that lasts as well as any photoperiod variety. Highly recommended.

Jack 47 Auto – this plant literally explodes. Difficult to get less than 2 oz per plant I have found. High is good though I do prefer Magnum overall. This is also now available in an XL form.

Cream Mandarine from Sweet Seeds – having some amazing results with this plants, in the last grow outdoors was able to yield over 50g from one of these beauties. Strong, long lasting high also.

22 thoughts on “Can I grow cannabis outdoors in the UK?”