I’ve noticed a lot of people looking for ‘how to get stoned without papers’ and similar stuff. It’s not that hard. Here’s my take. I would love to hear any more ideas. 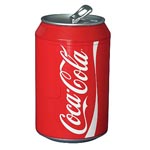 Any aluminum drinking can will do. On the side of the can where there isn’t an opening flatten the can down over a small area a few cm across. You should be able to make something vaguely resembling a bowl by pressing down and shaping the can in the right places. Next get a pin and stab a load of holes in this area. This is where you put the gear.

Then just suck from where you would drink and light the gear – if you want you can make a shotgun hole in the side by stabbing a knife in and turning it round a few times being careful with the sharp aluminum.  Simple and effective.

2. Empty out a cigarette and refill it

This may sound ridiculous but if you don’t have anything else it’s not. I met guys in India who could empty out a cigarette, add hash, and then fill it up again in less than a minute. It does takes some time – use the palm of your hand to put the mix in. This works with weed too – it just needs to be fine.

The secret is to twist the empty cigarette as you gently push it across your palm to refill it. And to keep giving the thing a few taps to pack everything down. When you’re done you can use the cigarette filter or twist and roll it out and replace it with a normal roach.

This only applies to hash, it’s quite severe but works. And you need a friend. You probably could do it with nice bits of bud, crushed up, but I have not personally tried that, apart from with bits of bush weed twisted into a ball with rizla papers. And that was a long time ago.

Go to the kitchen.

Get yourself a few small pieces of hash ready and put them on the kitchen worktop next to the cooker.

Find a plastic bottle and cut the bottom off, at a 45 degree angle.

Take two of your (or your parent’s/flatmate’s) finest knives from the cutlery draw, switch one of the rings on the cooker on and heat the ends of the knives up until they are red hot.

Get your friend to pick the bottle up and get ready to suck.

Take one of the knives, and hold it for a second or two until it is not red anymore.  Now, gently press the hot end of the knife onto a piece of hash. The hash should now be stuck to the bottom of this knife. Turn the knife around, so the hash is now on top of the knife, and bring the other knife above and down to press together on top of the hash.

This is when your friend should get right above the burning hash with the bottle. Press the knives together – there should be a lot of smoke – hold them there firmly.

Be very careful not to touch the bottle with the knives or your friend will get a load of poisonous smoke up their throat. This is important. The 45 degree cut should help with this.

Hot knives tend to have a bit of a delayed effect – so give it a while before repeating the process.

I recently found out how to do this on your own! 🙂

In India there is a yoghurt type drink made from hashish or weed, which I have tried and must say is bloody effective. Here’s some links to more information about this:

If you have a good lassi, it can take a very long time to come on, (more than an hour) and when it does it can be quite intense. A bit like cookies. I’ve made the mistake of thinking it wasn’t working, having another and then being in a place I really wasn’t planning to be in. A bit like this guy.

Devastatingly effective, and no rizlas needed. Get as bigger plastic bottle as you can, some foil, a pin and a bucket.

Cut the bottom off the bottle. Put some foil over the top end of the bottle and shape it into a bowl over the bottle top. Seal it all round shaping it with your fingers leaving some foil around the side of the bottle, and then make some holes in the top with a pin.

Fill the bucket 3/4 full with water.

Take the bottle, holding the foil bit on the top and sink it into the water as much as you can whilst holding the top of the bottle and bowl.

Fill the bowl up with gear. Take great care not to push the bottle down at this stage as it will blow all your gear into the bucket. Not good.

Hold a lit lighter next to the gear.

Now slowly, very slowly pull the bottle up from the water, as you do this, the smoke should be sucked downwards into the bottom of the bottle. Keep doing this and slowly keep pulling the bottle up until there’s still a seal at the bottom. Keep the lighter where it is if needed.

Carefully remove the foil that you shaped around the bottle top. This should come off easily enough – with care.

You now have a large bottle of cannabis smoke that anyone can inhale quickly by pushing  their head down onto the bottle as they take in the smoke. Lovely.

6. Make your own bong 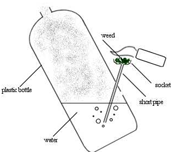 Not tricky at all – you just need a plastic bottle, some sort of pipe shaped object, some foil, a pin, a bit of tape, some water and a brain. I don’t need to explain this one surely.

Pretty obvious one really. Boil some weed up and make tea. I’m quite certain I’ve done this at some point, but I really can’t remember. I’m thinking of suggesting this to my mum.

Whether or not you can make tea from hash I do not know – please tell me if you know any better! Thanks.

Obviously there are plenty of other ways to get stoned without skins – but hopefully these are methods that can be easily utilised with everyday household objects without too much trouble.

9 thoughts on “7 ways to get stoned without rizlas (or tobacco!)”