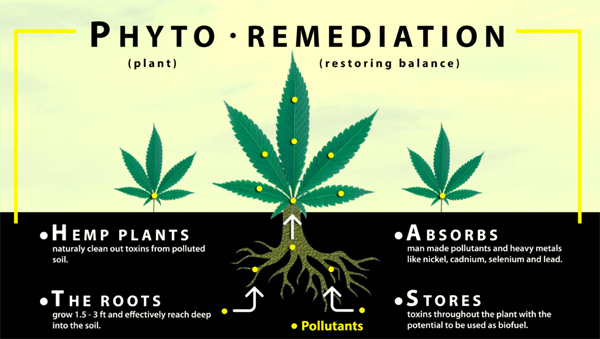 Incredibly, cannabis hemp is the most efficient way to remove radioactivity from soil. It outperforms other plants by many factors for this purpose. It is also very efficient at removing heavy metals from soil.  Image:kazmira-llc.com

2. Cats have Endocannabinoid receptors in their skin

Ever seen a cat react interestingly to cannabis or a cannabis plant? That’s because they actually have cannabis receptors in their skin. This can explain a lot of catty behaviour. What amazing creatures.

3. CBD is emerging to have potential as powerful new antibiotic.

In studies it has been shown that CBD has the power to combat even the most antibiotic resistant bacteria, although there are no studies on humans…yet.

4. In Italy, the army grows cannabis

The Italian military have their own pharmaceutical plant where they have been growing medical cannabis at a secure facility near Florence for some years.  Image:Youtube.com

5. You can build houses out of Hemp.

Hempcrete is breathable, energy efficient, non toxic, flame resistant, water resistant, offers amazing insulation and can be grown from seeds in 3-4 months. Why aren’t we using it more?

Lawmakers in Colorado have made it possible for businesses to apply for a license to run cannabis cafes where people can consume weed in public.

Some private clubs are already running and a dabs restaurant opens soon in LA.

Robert Murray Smith carried out a simple experiment to measure the experimental results of the power a Hemp battery possesses against a Lithium power cell. It was found the power underneath a hemp cell was a value of 31 whereas that of a Lithium cell was just 4.

Every day toking means your levels of endocannbinoid stores are constantly being topped up – read more about this here.

10. ‘Skunk’ is cannabis, whichever way you look at it

The word ‘Skunk’ has been demonised as strong dangerous cannabis, whilst at the same time being used in the growing of the cannabis grown secretly in the UK and sold worldwide by GW Pharmaceuticals, above.

12. Cannabinoids have been grown in yeast

Researchers have managed to perfect the process of growing THC and CBD using yeast, something which could have huge implications for how medicines are created in the future.

13. Cannabis can be used to treat and slow Parkinson’s disease.

A 2011 study has shown that cannabis can alleviate the symptoms of Parkinson’s disease as well as slowing neuro-degeneration.

14. The use of cannabis lowers bladder cancer risk

In a 2015 study it was shown that men who smoke cannabis have a 45% decreased risk of developing bladder cancer.

According to this research from the German Medical Association’s official science journal:

‘Patients who take cannabinoids at a constant dosage over an extensive period of time often develop tolerance to the impairment of psychomotor performance so that they can drive vehicles safely.’