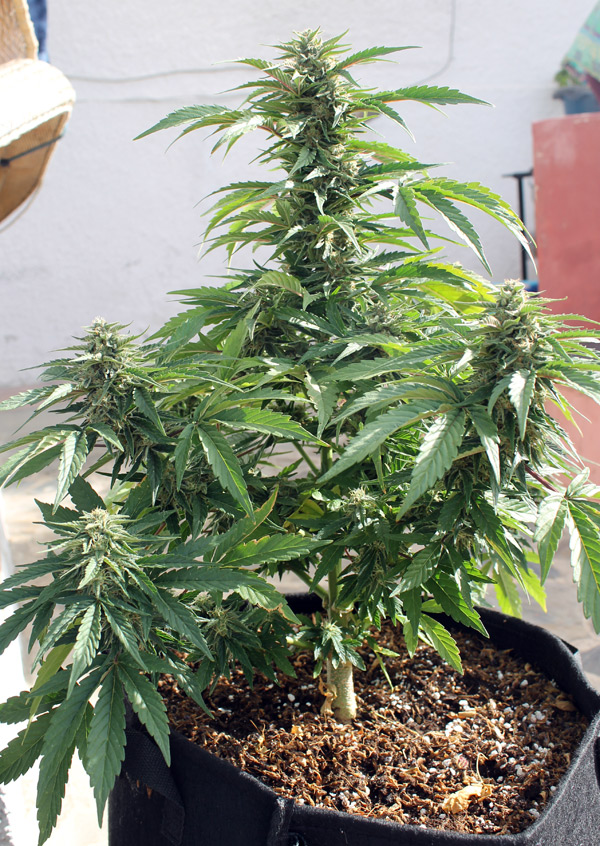 Something needs to be said about these things. I have been growing autos outside now for five years. I have tried a lot of brands. Dinafem, Lowryder, Flash Seeds and others. All have been OK but just that. Yield has always been a disappointment, despite pictures of other people taking ounces off similar plants.

But those days are gone now.  The Magnum is a game changer. It is an autoflowering plant that is worth growing and is easy to grow. I chucked a seed in a 26 litre dirt pot with standard potting soil and a bit of perlite and watched with astonishment as this thing turned into the most productive auto I have ever grown.  Around 60 days later I had well over 40 grammes of really decent bud.  No fancy feeding or anything. Every branch was like the main cola. There was no pop corn. Every bud a winner. I didn’t have my scales at the time but it filled one of those standard glass clip top jars full, one plant.

Now I smoke a lot of weed, seriously. Some varieties are just not strong enough for me, or I get through them too fast. The Magnum does well here. It’s a strong happy energising high which allows you to do work and concentrate on tasks.

I was smoking it at the same period as some OG Kush and I have to tell you this was the preferred morning smoke.  It didn’t taste as good, but I preferred the effect. No shit. And it lasts – as I said, this is no bullshit weed.  Friends thought the same.  The effect has been compared to the strain Jack Herer. It makes you go off and do stuff and forget about smoking any more for quite some time. In this way, it ends up lasting longer than other weeds I have smoked (even photoperiod varieties!)

The best auto yet.

I cut this one when the trichomes had just turned milky, it didn’t even get a proper cure and it still kicked arse. Can you tell I am impressed? These are going to be super plants for growing outdoors in the UK.  In Spain, I have heard reports of 250g per plant when these are grown in the earth! Local farmers are apparently dumfounded.

Get your Magnum seeds at the Vault