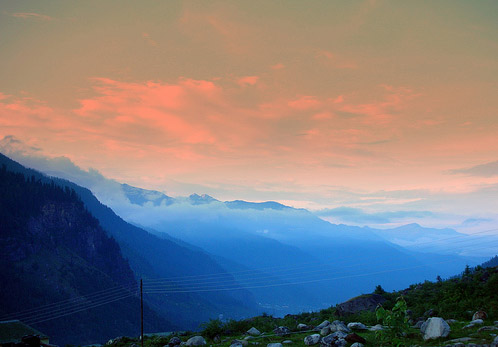 There’s some great hash in India.

As well as plenty of other amazing things. If you are a toker, however, then you are going to want to check it out.

I have fond memories of hanging out in a great little place called Vashisht, above Manali in the Kulu Valley. I went there for 5 days and stayed about 2 weeks. Natural springs, great hash, weather, scenery and company are a winning combination.

It is this area where arguably the best hash in the world is produced. This is an oustandingly beautiful place with mountains and valleys, and an almost alpine feel. Compared with a lot of India it is so peaceful up in those mountains – a great deal less frantic.

Cannabis is part of the culture in India and has been for thousands of years. The Sadhus – the holy men of India smoke it from chillums openly – that doesn’t mean you should though. Do be discreet. That said if a bunch of Sadhus invite you over to smoke a chillum with them, it would be rude not to! That did happen to me a few times. Which was great.

Manali hash is a wonderful creamy thing of beauty. It is very strong. Smoked in a chillum, as is popular in India, it can be disabling, as I found out one morning. I could crawl after about 4 hours lying in a heap.  Why I thought I would be able to keep up with the resident hippies there I will never know.

3 thoughts on “Memories of Manali”