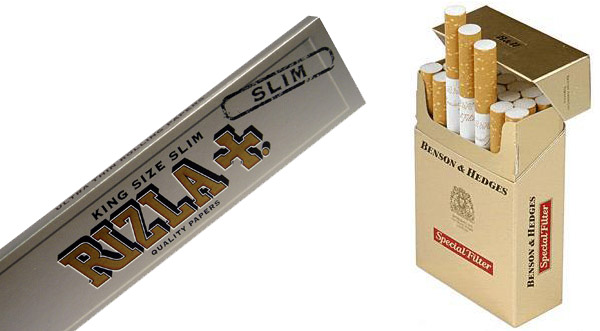 I think I could be a bit of a traditionalist when it comes to smoking, in the UK at least.  20 Bensons and a packet of silver King Size Rizla is the order of the day for me.

I couldn’t always roll my own though. When I first started off I used one of the big cigarette rolling machines to ‘skin up’.  I don’t do that anymore.

Despite the best attempts of friends and drug dealers to teach me I remained pretty much useless at making spliffs until I went to India where a great Indian man showed me his way, and I have used it ever since. I do occasionally use the French method of making the whole mix first in one hand which can be very useful when in windy areas.

Obviously when younger I did hot knives, buckets and bongs – oh yes. They seem to be much more of a rarity nowadays.

The funny thing about buying king size rizlas (which are available EVERYWHERE in the UK, as a rule) is that everyone knows what you’re up to. Yes cannabis is illegal but you will find king size rizlas in pretty much every newspaper shop for some reason. I have noticed varying reactions from shop keepers when I ask for the big silver rizlas.

Somebody did ask Rizla the company about the whole king-size-rizla-joint-making-issue and they said:

“No, no, sir. That’s definitely not true. We often get told this, but our surveys indicate that king-size Rizlas are bought almost exclusively by long-distance lorry drivers who like long cigarettes that last a long time on very long journeys. They don’t have to stop to roll so many, you see. They save time and money this way. The idea must have really caught on. We sell loads.”

What Do You Use To Get Stoned?

7 thoughts on “What Do You Use To Get Stoned?”