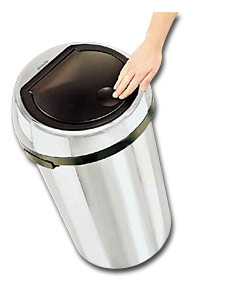 I had an interesting morning today.

I got up from my extremely tolerant girlfriend’s side, and slunk into the lounge  to partake in a saturday morning smoke, before grabbing a bit more sleep. Something I  do a lot. It’s nice.

The previous night had been a very pleasant one with some good friends round, and I was pretty sure I’d left my lovely lump of new hash on the table.

So when I went searching today I was more than a little surprised to see no sign of the hash at all. Vanished. It would appear.

I looked high and low – but nothing. Even tried calling my mate who had no idea. Something was not right.

Then for some reason I decided to look into the bin. Why I am not sure.

And bingo! There it was, right at the top of the bin, amongst a load of ash and stuff.

It would appear that the friend we have staying may have been a little over enthusiastic with her morning cleaning.  She’s blond, so I don’t blame her. I do similar things, but crikey, that was a close run thing.

In other news humans make their own marijuana.

2 thoughts on “Where’s the bloody hash?”